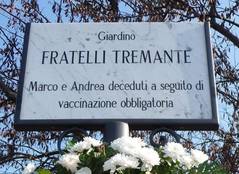 To prove how much damage vaccinations can do, so indiscriminately used on families from all over the world, I think it is necessary for me to tell my story. Unfortunately my story is not considered a sole and sporadic case in itself, but it is just the tip of the iceberg. Vaccinations are still being forced onto people through fear based tactics.

My family has been the victim of vaccine injury and three of my four children have been irreversibly damaged.

I state that my three children affected by vaccine reaction, were born perfectly healthy and that the manifestations of the disease appeared only after the first Sabin polio vaccine. My eldest son’s recorded clinical symptoms, which had appeared after the Sabin polio vaccination and correlated through the pediatrician to the anti polio vaccine, were as follows . ocular nystagmus, tremors and speech defects. It was interesting to see the diagnosis of the pediatrician being interpreted differently by other doctors, as they had assumed the sudden health problems were to be attributed to brain tumors or degenerative encephalopathy, never confirmed by any analysis performed on the child.

​My eldest son died in 1971 at age six. With the second child, born in 1970, there were no problems – despite vaccinations received, but the drama came up again with the birth of twins in 1976.

Despite my fierce opposition to have my twins vaccinated, a law made it mandatory and without any prior investigation, that the shots be administered. Already the very next day side effects began to emerge and the first signs of change was perceivable and clearly visible.

I submitted the medical records of my twins’ first hospitalizations to various Universities in the United States, in England and even in Russia. In the latter country it was assumed that my children were plagued by a drastically impaired immune system, that confirmed the direct cause and link to the vaccinations given to them. My children were diagnosed with “Metachromatic Leukodystrophy Type” by doctors of my city, Verona, Italy. The above mentioned condition is a degenerative disease of the nervous system, and has never been confirmed by genetic tests to which we subjected ourselves too.

​Later, Andrew, one of the twins, had a deterioration of his health and was hospitalized for dehydration. Despite my recommendation not to make use of immunosuppressive drugs, because the child was Immuno Compromised, an infusion of cortisone was administered and five hours later Andrew died. Later I learned, that the same drug was also administered to my first child before death.

​Despite the fact that we would have had useful information to save the life of the twins, it was not accepted because we were denied the presence of the coroner at the moment when our first son died, so that the examination performed by the pediatrician could not be validated and applied to our research. One month after the death of Andrew, also Albert, the other twin brother, had to be hospitalized.

Foregoing the opinion of doctors to let him die, we were able to have our request granted to move him to a Pediatric Intensive Care Unit and we had a virologist from Naples (Dr. Tarro) come to attend and who had previously examined the child. This doctor from Naples advised to apply immuno stimulants. Subjected to treatment with "interferon", the boy began to slowly improve. After six months in the hospital the child was brought home with no letter of discharge from the hospital. Some time later, medical records that we requested, I noticed that they were different from those we photo copied daily during the time of hospitalization. Due to this discrepancy we presented a judiciary complaint. As a result of our legal action the Attorney of the hospital counter sued and declared that this was a case of “Public falsification of records”.
Alberto, the twin brother, was admitted at the same hospital in Verona as Andrew was too and also in other ICUs: the Policlinico of Milan, in the province of Como, Merate, Melegnano, near Milan, and finally was transferred to the office from Melegnano to the Hospital of Verona.

During all the various hospital stays my task was to ensure that immune therapies were practiced which had given positive results before. These therapies were always recommended to us by Professor Tarro of Naples, who had been a student of Professor Sabin. It was always difficult, if not nearly impossible, to apply this type of therapy to Alberto, since the medical faculty had already ruled that my son should die. This was supported because the cause of the injury had been directly correlated to the discovery that it was caused to the vaccines given, despite the child was already partially immuno compromised.

Although our case had gained the interest and direct involvement of the Italian President, Mr. Sandro Pertini, and despite pressure onto the Minister of Health, to bring to life a Ministerial Commission through Mr. Renato Altissimo, it all fell through due to the falsified data that did hide the truth of the damage my son suffered through the vaccine.

During the last treatment my son underwent at the Albert Hospital of Verona, the doctors were the opinion that my son would die soon. I then tried desperately to bring home my baby, since that was their way of thinking and because the only solution to the problem for them was the culmination of our whole nefarious affair.

At that point a children’s judge of Venice did revoke my “parental authority", which I right away fought and refused to let happen. I tried to make him understand that he was committing a gross error. I managed to convince the judge to reinstate the parental authority, beginning early 1984. I was able to reverse the decision of the court by creating a "recovery room" in our home, right in our bedroom. During all hospital stays my wife Franca Albert was at our son’s side each and every day and every night in order to protect our child from any possible medical abuse or more damage.

Health care institutions did not want to admit that vaccines were the cause of his illness and death of his brothers and thus they tried every possible maneuver to erase leads on it. Finally, in 1995, by resorting to the law 210 of 1992, recognized by the State, the jugde saw the "causation" of the damage suffered by subjecting our children to the vaccination requirement.

During all these years I ADOP was established. An association in Italy that has been gathering information and data from people who have suffered damage from vaccination practices; I also tried to push for a law, to remove the mandatory practices of administering these vaccines, but this goal was not achieved in Italy, because, in my opinion, the health care industry has been dominated by the corrupt power of the Multinational Drug monopolies. All this is proving that even in this area, some pseudo-science of gross arrogance and devoid of all scruples, tramples on people and the vaccine victims. Illegal practices that did override all human and civil rights. It imposes its power based primarily on speculative interests without giving any accurate information on the potential dangers associated with vaccines, but rather of a deliberate misinformation and complete cover-up up to promoting that it is to the prophylactic prevention of illnesses.
Marco Tremante                                     Andrea Tremante

​Alberto Tremante
Click here for more on the Tremante Family Story and visit www.tremante.it.
"It is not the intention of this site terrorize people on immunization, but the intention is to make us ask questions in order to understand if we parents we are sufficiently informed of what may happen to our children, when subjected to these practices .
We can start with fairly trivial questions that will certainly help us when we should begin to worry about anything because of negative happen to our children if we decide to accede to these risky methods. Let us remember that the risks are and there are many, not virtual, but real!"
Giorgia Tremante
​www.tremante.it​
About    Blog    We Remember    Families Speak    Doctors Speak    Resources    Prayers & Messages    Subscribe    Contact
Vaccine Choice Prayer Community