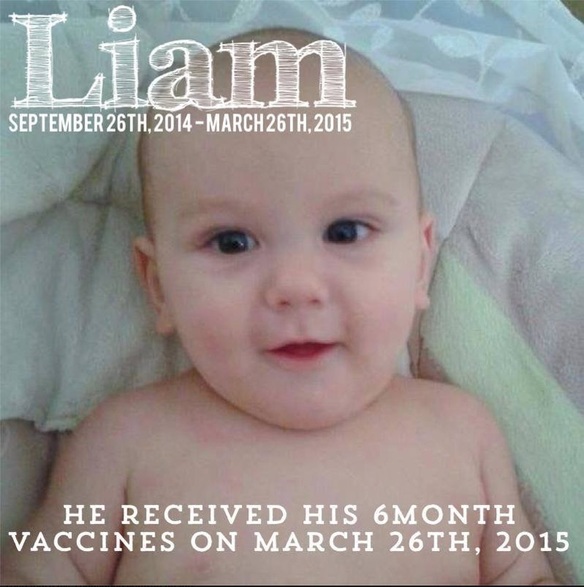 Derek and Breanna lost their son, 6 month old Liam, suddenly on Thursday evening 3/26/2015. Liam was deeply loved and brought immense joy and love into the lives of his parents and all that knew him.

Liam , who was born on September 26, 2014, was a vibrant and healthy baby boy who was still nursing at the time his mother took him in for his 6 month pediatric well-baby checkup on the day he turned 6 months old. He passed away a few hours after the vaccines were given at the 3:30 PM appointment on March 26, 2015.

It was a typical evening on Thursday when Breanna nursed her son and laid him down to sleep. After a short period of time, she went in to check on him and he was chilly and blue. She rushed him to his Papa, Del, who is a First Responder, and he did all he could to try to revive Liam until the ambulance arrived. Unfortunately, Liam could not be revived. Derek and Breanna have donated Liam's heart valves so other families hopefully will not feel the pain and suffering they are feeling. In a split second, their lives have been forever altered.
Liam's death was preliminarily ruled SIDS. Not vaccine induced death but SIDS.
​In the video below, Liam's Mom talks with members of the VAXXED Nation Tour team, including
Mason's Dad who also lost an infant son to vaccines.
Within this video is a video of Liam taken approximately 30 minutes before his doctor's appointment where he received the Hepatitis B, TDap, Polio, Rotavirus, and Pneumococcal vaccines.  He was given Tylenol a short time later and passed away within hours.
​"After Liam died, everything just kind of fell apart, because after losing your kid, you lose a piece of yourself ...my happy, perfect little family that I had completely fell apart . . . and you think you're doing what's best for your kid, what's the healthy thing, and that healthy thing ends up taking everything from you.  The one decision which you thought was a good decision ends up taking all of it because I didn't just lose Liam; I lost my marriage, I lost partial custody of Wyatt. I lost me.  I lost the joy of being a mom because I'm not the same mom that I was before.  Things changed, Everything changes, and it's not fair."
About    Blog    We Remember    Families Speak    Doctors Speak    Resources    Prayers & Messages    Subscribe    Contact
Vaccine Choice Prayer Community