Cameron's Story . . . as told by his mother, Mistie 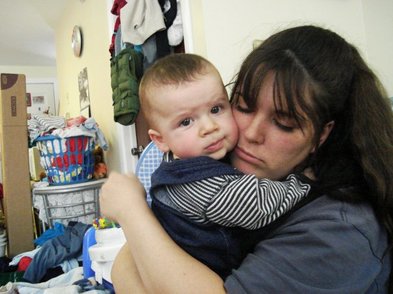 Cameron before autism
​
​My son's name is Cameron, He was allergic to many of the ingredients in the vaccines. I kept telling my doctor that he was getting sick after each vaccination appointment.  She kept saying things like its not the vaccines fault and even if it was he would have been worse off without it. As this continued, she would assure me that the benefit outweighed the risks and that there was no way vaccines were harming my child.

Up to this point my son would recover and was still meeting his milestones so I thought maybe I was over reacting even though I was scared to continue vaccinating. 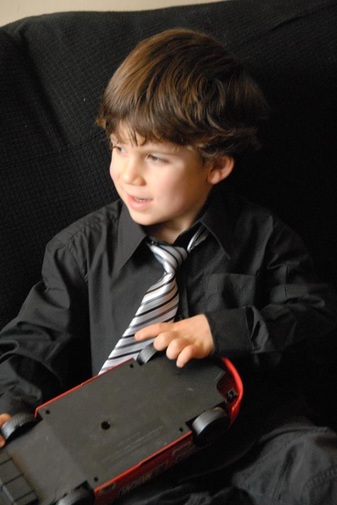 Cameron - Age 4
His 1 year shots for 8 diseases came with all their adjuvants, preservatives, animal and human aborted tissue (DNA) ect.... My son spiked fevers, was lethargic, starting arching his back so hard I thought he would break it, he became very sick and although he wasn't able to do the things he had normally done, I figured it was because he was so sick. Then when he stopped being so sick, I realized he lost everything. All he would do is sit there rocking; making the same noise over and over again.  It was like I wasn't there and If I forced myself into his view he would scream. He wouldn't let anyone hold him or look at him or he would lose it for the day. Of course I had to carry him at times and watch him. He wouldn't sleep more than 2 hours a night and no naps. He would scream and cry for the next 3 years straight. With 4 years of therapy he was retaught to walk and make eye contact and still came out with less than most go in with due to his severity

The worst part is there is no way to explain to him or console him or hear his silent requests and needs.
I dont like to admit thal I got him the H1N1 shot at three years old after everything that had happened but my doctor bullied me into it claiming because he had neurological issues already that he would surely die if I could not prevent him from getting this virus. She also said it was so wide spread every one was going to get it so I argued with myself for weeks and the news was fear mongering and I panicked and got him the shot. He got really sick; was hospitalized and started having seizures. I hate myself for that. It was a really stupid move. He was already so vaccine damaged as it was but I think part of me still wanted to believe it was all in my head and that the professionals knew best.

Since then I have preached to anyone who will listen about the risks and harm of vaccines. I have always felt the guilt of the world for my preventable decisions and I hope it can help someone to make the proper informed choice; and if I had my way, a ban on vaccines altogether -- until they are proven safe and effective. "FIRST DO NO HARM."
​My son is now 8 years old and I will be lucky if he ever reaches the skill level he was at a year old. He is severely autistic, has seizures and major food allergies.  He is on a pureed diet and is severely allergic to dairy proteins, eggs and gelatin and carries an EpiPen Jr. for those allergies.  He is also moderately allergic to sugarcane and has an intolerance to gluten, causing extra behavioral issues but it really isn't important in the grand scheme of things I suppose.   Cameron has no communication skills, not even pointing or waving or any form of reference. He is still in diapers but has super human strength, high tolerance to pain and no concept of danger. He self injures and is getting bigger, stronger, and faster than me on foot. He throws and breaks everything intentionally thinking it is funny as he has no appropriate play skills due to his lack of understanding. He will walk into a body of water right over his head and breath not understanding and not learning from the experience. He will walk off a ledge or steep hill. NO concept of danger.

I am a single parent and have been since my son was born. I have never been able to travel with him any great distance, due to all my sons special needs and also due to lack of funds. We don't have the ability to leave our house very often other than necessity since we have been going behind now for quite some time financially.

I love my only child more than anyone but I will be lucky if I ever hear it back, let alone rid myself of my constant nightmares of what will happen to him when I am gone. I am an only child, my son is an only child and his fathers family has nothing to do with him. When I die or become too old, my son will be completely alone with no one to even check on him. This truly breaks my heart and I can't help but worry about this considering it is our unavoidable truth

​Thank you to everyone brave enough and able enough to fight this genocidal mandate for us all. We are so proud of you all and you are really giving everyone's future children a chance at avoiding my sons tragic experience.​ YOU ARE THE LEADERS WE NEED IN A WORLD SO CORRUPT WE PLEAD! STOP THE MANDATE!
Mistie has created a Facebook group page to share information in an effort to help others . . .
​​
Medicare for Autism.
Medicare for autism and vaccine adverse reaction information
http://www.facebook.com/Autism.Hurts.ABA.Helps
​
About    Blog    We Remember    Families Speak    Doctors Speak    Resources    Prayers & Messages    Subscribe    Contact
Vaccine Choice Prayer Community